DemirBank was established in Bishkek city in accordance with the Kyrgyz legislation. And received all the necessary licenses to conduct banking activities on May 2, 1997. The official opening ceremony took place on May 28, 1997 with the participation of the President of the Kyrgyz Republic and the Bank's shareholders. Issued share capital on July 1, 2018 amounts to 600,000,000 soms. 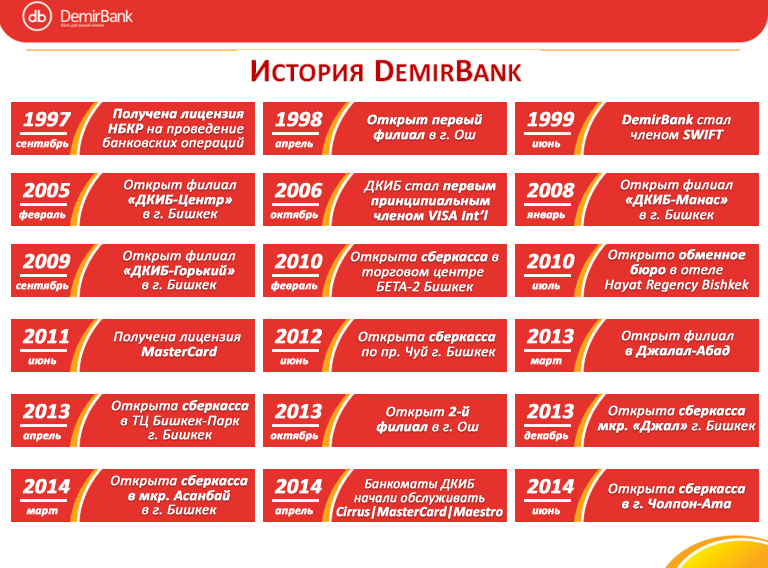 20 years of successful experience in the market of Kyrgyzstan, stable relationships with customers, implementation of international standards and a strong team of professionals gives the bank a competitive advantage in the market and makes it a reliable partner for customers.

DemirBank is an active member of various business associations and organizations such as the International Business Council, the American Chamber of Commerce Am Cham, Association of Banks of Kyrgyzstan, the Agency for the Deposit Protection of the Kyrgyz Republic and Rotary Club, and as well as partner and participant in the national payment system ELCART, international payment system VISA, Master Card. 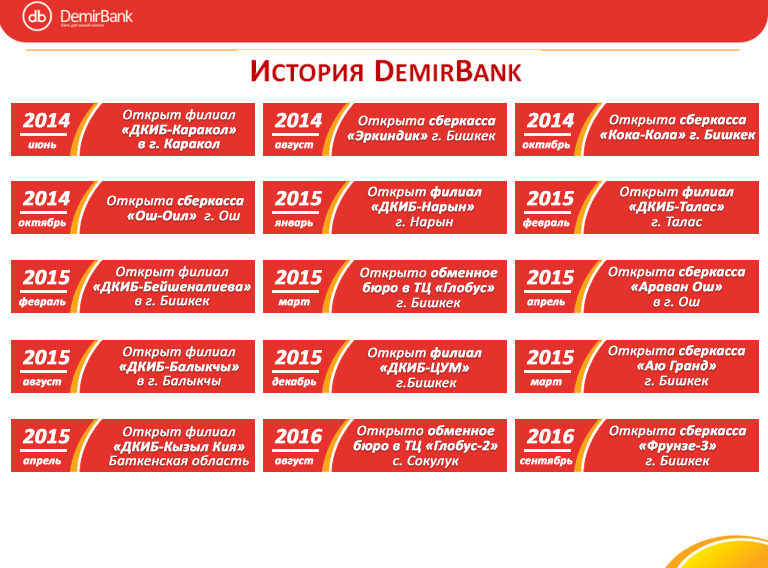 One of the successful index of the bank is a wide customer base, which is growing every year, and continuously expanding of services types.

In January 2017, DemirBank has successfully passed the audit for compliance with the international standard PCI DSS3.2. Data Security Standard PCI DSS Payment Card defines security requirements involved in payment card processing information systems. Successful completion of the audit of this standard is a prerequisite procedure, which indicates by international payment systems to all entities, working with large volumes of card transactions.

DemirBank always uses the best software in work and tends to provide the best service to customers, introducing new technologies and innovation.

The highest status of the bank's participation in the international system entitles DemirBank quickly and efficiently provide its customers with a full range of services with the use of VISA and MasterCard payment cards and work directly with the international payment system.

Principal Member status assignment indicates the high status of DemirBank, compliance of safety standards, reliability and trust of international partners and confirms the successful activity of the bank.

DemirBank  with certainty maintain a stable rate of development, and for 20 years the citizens of Kyrgyzstan provides with professional service in full compliance with international standards.

DemirBank is one of the first commercial banks in the Kyrgyz Republic, who launched the payment cards in the country. For the convenience of customers DemirBank offers Visa`s debit chip cards and credit cards, allowing to use their own or borrowed funds (credit limit).

Credit card from DemirBank is a nominal payment card, which is provided to the customer to buy goods and services on credit, provided by the bank. In this case, the customer is not required to apply to the bank for a loan registration and to confirm purpose, the existence of credit cards already allows to customer the use of funds for essential needs.

A significant advantage for credit card holders is the opportunity to pay for any purchase online, receive tangible discounts on goods and services and not pay interest for using the credit limit during the grace period granted. FREE withdrawal of national currency in the bank's ATMs,

Also nice bonus for DemirBank`s credit card holders is the loyalty program CashBack, which allows you to earn extra income for each purchase, and operates in a wide network of bank`s POS-terminals.

DemirBank always striving to create the most comfortable environment for customers and provide competitive options for cooperation.

DemirBank always uses the best software and committed to provide the best service to the customers, introducing new technologies and innovations.

For successful activities in the banking sector for the past few years, DemirBank continues to receive honors, and according to Euromoney, Global Finance, Trade Facilitation Program, Asian Development Bank, The Banker, The Asian Banker, CITI versions recognized as the best bank in Kyrgyzstan.

Demir Bank continues to maintain leadership in the number of ATMs and POS-terminals in Kyrgyzstan and increasing non-cash turnovers.

DemirBank ATMs equipped with the latest technology and allow to cardholders to make transactions with funds. For customers' convenience, there are 2 two types of DemirBank ATMs: Cash out and Cash in.

Cash out ATMs allow to withdrawal from account. Cash in ATMs allow you to deposit funds, to make transactions on your card around the clock, without commission for deposit. Deposit funds is instantly reflected on the customer`s card account.

Make deposit and withdrawal from Your account in DemirBank: easier, instantly and profitably. Use Cash-in and Cash-out ATMs!

The advantage of DemirBank`s ATMs and POS-terminals is in a wide geographical coverage and accessibility for customers and for partners is to save costs on the conversion, storage and collection of cash.

The volume of non-cash transactions in 2015 increased by 25%, while the number of active terminals in January 2017 is 1669 pcs., of which 292 contactless POS-terminals, working on PayWave technology. A new kind of contactless payment cards makes non-cash payments in retail outlets easier, faster and convenient.

PayWave technology cards allows to make instant purchases without passing the card to the cashier hand, and are based on a special technology that allows to securely store and encrypt confidential information about each operation.

DemirBank offers the ability to quickly and conveniently pay the fines of Traffic Police of Ministry of Internal Affairs for violation of traffic rules in the bank's payment terminals throughout Kyrgyzstan in cash or by using payment cards via POS terminals. For the customers convenience and mobile services, 308 DemirBank`s POS-terminals we given in the operation of the use to the employees of Traffic Police MIA.

Appreciate your time - manage Your bank account via Internet banking!

DemirBank is one of the first banks in the Kyrgyz Republic, which from 1999 is the member of the Society for Worldwide Interbank Financial Telecommunications - SWIFT.

SWIFT community society (Society for Worldwide Interbank Financial Telecommunications) is the leading international association in the field of telecommunications and financial services.

The advantage of DemirBank in SWIFT system participation is to provide prompt, reliable, efficient, confidential and protected from unauthorized access telecommunication services of financial institutions and organizations.

At present, users of SWIFT are more than 10 thousand of the largest banks (including central / national banks) and financial institutions (investment companies, stockbrokers firms, stock exchanges, depositories from 212 countries. In recent years, more than 1,000 leading corporations have become a SWIFT users (General Electric , EADS, Microsoft, LUKOIL, Rosneft and others).

DemirBank, being the first international bank in Kyrgyzstan, has an extensive branch network, which is represented by 13 branches, 14 outlets and 8 exchange offices. The advantage of DemirBank's branch network is a wide geographical coverage and customer accessibility, expanding the range and improving the quality of services, professional providing of all financial transactions within and outside the country.

DemirBank believes that the most valuable assets is professional staff, so the bank is always trying to create better conditions and perfect atmosphere for colleagues. Considerable attention in DemirBank paid to the development and professional growth of its employees.

On an ongoing basis, DemirBank's employees participate in various seminars and trainings in the country and abroad.

Professional staff DemirBank is one of the most important success factors. The Bank is working to create and maintain an effective organizational structure that allows employees to perform their duties well and to take the initiative, thus defining the main business lines of the bank:

We believe that the most important success factor – is the professional staff.